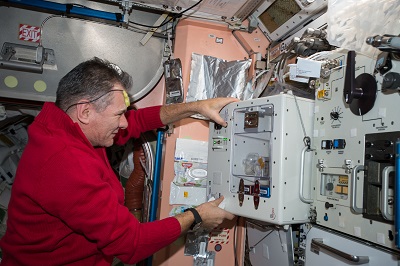 Turin (December 14th, 2017) – After 32 months aboard the International Space Station (ISS), at 400 kilometres above the Earth’s surface, today marked the end of the mission “Coffee in Space”, featuring ISSpresso: the innovative capsule-based espresso machine installed into ISS Node 1/Unity and created by Argotec for Lavazza, in partnership with the Italian Space Agency (ASI).

It was a long journey that began on May 3rd, 2015 during the FUTURA mission — with Samantha Cristoforetti drinking the first espresso coffee in micro-gravity conditions in history — and ended with the International Space Agency’s VITA mission, during which Italian ESA astronaut Paolo Nespoli completed his third voyage into space. In its two years in space, ISSpresso travelled more than 650 million kilometres at a speed of 28,000 km/h, took in nearly 15,500 sunrises aboard the International Space Station and was featured prominently in various moments of conviviality and enjoyment over an impressive 11 space expeditions. ISSpresso allowed the crews to enjoy espresso of the finest quality in space, just like at home: for the first time, the authentic Lavazza espresso was brewed in extreme conditions, where the principles of fluid dynamics are completely different from on Earth. The cream and coffee were not mixed, as on Earth, but were separated, with the traditional cup replaced by a special pouch. However, the preparation process remained the same, in order to guarantee the utmost practicality and simplicity for espresso which was then enjoyed through a straw.

This innovative capsule system also allowed the astronauts to prepare caffè lungo, hot beverages and broth thanks to food rehydration

Photomicrograph of the liver showing in the treatment groups ‘C’ that received 1. buy viagra online or maintaining an erection. Aetiologic factors for erectile.

Impact of EDtreatment. This low figure is expected to change radically cialis prescription.

. The value and innovation of the Italian ISSpresso project has been covered in media from more than 30 countries around the world, with a social media buzz that reached more than 950 million impressions, along with a presence at various prestigious events such as: “Impact. Innovate. Integrate”, the forum on the innovation and digitalisation of the mechanical engineering industry in Chicago; the show “Astronauts” at Cité de L’espace in Toulouse; Expo 2017 – Future Energy in Kazakhstan; and LIFE, a U.S . film set in space, in the International Space Station . Indeed, interest in the project has grown throughout the world, to the extent that the renowned Victoria & Albert Museum in London has chosen to include a model of the machine in the exhibit “The Future Starts Here”. There, beginning on May 12th 2018, ISSpresso will be on display alongside 100 other design objects that are contributing to shaping the world of tomorrow. "We are proud to be able to celebrate International Coffee Day 400 kilometers above Earth’s surface thanks to this important 100% Italian research project developed with Argotec," commented Marco Lavazza, Group Vice Chairman.

"ISSpresso allows Lavazza to confirm its role as a pioneer in innovation: the ISSPresso technology has allowed astronauts to enjoy in space the same blend available on ground" . The ISSpresso machine — a true technological and engineering marvel — has thus allowed another Italian astronaut to enjoy espresso in space, just like at home. ISSPresso has been studied to replicate on orbit the same aroma enjoyable on ground: the crema and coffee are not mixed, as on Earth, but are separate, with the traditional cup replaced by a special pouch. Indeed, ISSpresso is capable of making coffee in extreme conditions, where the principles of fluid dynamics are completely different from on Earth. The preparation process followed by the crew during the test were the same: the utmost practicality and simplicity for espresso to be enjoyed through a straw. ISSpresso meets the very stringent requirements set by NASA in terms of compatibility with the systems already present on board and those interfacing with astronauts. It also has an innovative device that allows the coffee dispensing line to be cleaned.

David Avino, Managing Director of Argotec, commented, "ISSpresso has become a permanent onboard component of the International Space Station. And after two years on the ISS in micro-gravity conditions, the machine remains fully operational, confirming the excellence of the design work. This robust, reliable design is not only capable of treating the crew to a flavourful break, but also provides fascinating opportunities for the study and analysis of physical phenomena that are impossible to replicate on Earth. This scientific interest also accompanies a green vision of the product: thanks to this system, we have already patented innovative technologies capable of eliminating the coffee and water deposits generated by machines on Earth, thus reducing water waste by up to 30%."

Gabriele Mascetti, Head of Human Flight and Microgravity at the Italian Space Agency, commented: "The current international scenario of increasing interest in human space exploration is laying the foundation for ensuring the future presence of astronauts beyond low Earth orbit not seen since the days of the Apollo missions. The incredible financial efforts entailed by such undertakings are driving new global approaches and the growth of new markets. Within this scenario, the race to explore space is also being driven by commercial players: ISSpresso, the result of a public-private partnership, is a brilliant example of how the Italian Space Agency has succeeded in promoting interest in space through wholly private efforts. Furthermore, given the strong credibility enjoyed by ASI with NASA and solid bilateral relations, ASI has negotiated the use of ISSpresso as an onboard system of the Space Station and no longer an Italian experiment: in other words, this means that the device will remain on the Station, instead of burning up in the atmosphere, and the resources needed to keep it operational will be provided by NASA, without weighting on Italy’s rights to use of the Space Station. As a result, the astronauts living on the ISS will be able to enjoy authentic Italian coffee for a long time to come."