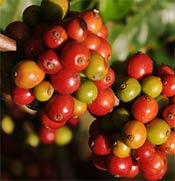 Caffe Ibis (Logan, UT) has seen sales of its triple-certified (organic, Fair Trade Certified™, and Bird Friendly®) coffees increase dramatically over last year at the University of Utah (Salt Lake City, UT), and Utah State University (Logan, UT), the result of both expanded availability and, in the case of the University of Utah, benefactors, faculty and students alike urging the food service to “green” its offerings.

Equator Estate Coffees & Teas (San Rafael, CA) has provided organic coffees to the City College of San Francisco since 2007 and is expanding into college food services nationwide by providing organic coffee to Feel Good World (www.FeelGoodWorld.org ), a student-run social venture to raise money and consciousness about world hunger and sustainability at campuses across the country . Working hand-in-hand with the organization, Equator is developing a coffee service program at ten college locations, including the University of California-Berkeley, Columbia University (New York City, NY), and the University of Arizona (Tucson, AZ).

Selling its Fair Trade organic coffee to over 175 colleges and universities nationwide, Green Mountain Coffee (Waterbury, VT) has seen these sales triple over the past two years, according to a recent report. Key locations include Wesleyan University (Middletown, CT), Indiana University (Bloomington, IN), the University of Massachusetts (Boston, MA), and, of course, the University of Vermont (Burlington, VT).

Decaffeinated coffee is also popular among college students and administrators who enjoy a good cup of coffee but need to reduce their caffeine intake . Much of the decaf on campus has been decaffeinated using Swiss Water Decaffeinated Coffee Company’s (Vancouver, Canada) process, as it uses only water to extract caffeine from the coffee beans. A new company using carbon dioxide (CO2) for the decaffeination process, Maximus Coffee Group (Houston, TX), recently became certified to the federal organic standards, and its products will hit the college market soon.

“The switch to organic coffee on campus is happening despite the current state of the economy,” said Christine Bushway, OTA Executive Director.

A number of survey on attitudes to ED have been reported. viagra kaufen berlin The duration of response was wide and ranged, from a mean duration of 22 minutes for plasma sildenafil concentrations in the range 0-50 and 50-100 ng/ml to >30 minutes at concentrations above 100 ng/ml..

• Routine and necessary: an assessment necessary in all cialis from canada cigarette smoking, substance abuse or depression, sexual.

. The amount of organic coffee imported into the United States and Canada increased 12 percent during 2008, rising from approximately 81 million pounds to approximately 89 million pounds with most of the sales taking place in the United States . The 29 percent annual average growth rate for the organic category documented by Giovannucci between 2000 and 2008 dwarfs the estimated 1.5 percent projected annual growth rate of the conventional coffee industry. The survey is available from the Organic Trade Association.