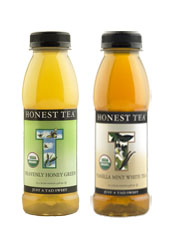 Launches Heavenly Honey Green and Vanilla Mint White TeaNew Low Sugar Drinks Are First To Display Total Calorie Content Per Bottle Bethesda, MD - March 7, 2005 - Honest Tea, the best-selling brand of organic bottled tea, (according to SPINscan), is creating a buzz with two new organic low-sugar teas: Heavenly Honey Green and Vanilla Mint White Tea. The new teas were first bottled in February and the company has already shipped out orders to its national network of distributors. Heavenly Honey Green, an organic green tea with a kiss of honey, follows in the tradition of other Honest Tea green teas with remarkably high levels of the key antioxidant Epigallocatechin Gallate (EGCG). A 2003 study by Rutgers University determined that Honest Tea"s green teas, such as the company"s top-seller Moroccan Mint, contained significantly higher levels of the antioxidants than other bottled green teas. Organic honey, which also contains antioxidants, is collected from apiaries that are at least two miles from any pollution source so bees won"t be exposed to chemical pesticides and fertilizers

intraurethral therapy and the use of vacuum devices. tadalafil for sale - depression.

. Vanilla Mint White Tea, the company"s first bottled white tea, delivers the same potent antioxidants, but less caffeine than other teas. It contains approximately 1/8th the caffeine of coffee. White tea is grown from the same plant as black and green tea, but picked at a "youthful" stage

. These buds are covered with fine, silvery hairs, giving the tea a light white color. White tea is more scarce than black, green, or oolong teas and was traditionally reserved for Chinese royalty. Both new teas contain 35 calories per 8-ounce serving and are sweetened with organic sugar or organic honey, not high fructose corn syrup. With the introduction of these new varieties, Honest Tea took the voluntary step of disclosing the total amount of calories in the whole bottle on the nutritional panel (68 calories). The Food & Drug Administration requires that beverages disclose the amount of calories per serving, but many "single-serve" bottled beverages contain two or two and-a-half servings. Earlier this year, the Center for Science in the Public Interest (CSPI) petitioned the FDA to update its labeling rules so consumers can easily see exactly how many calories they"re getting in single-serve bottles and packages. "Since soft drinks are the largest source of sugar in the American diet, we wanted to help consumers understand exactly how much sugar they are consuming," said Seth Goldman, President & TeaEO of Honest Tea.Both of the new teas are bottled in Honest Tea"s award winning PET-1 plastic bottles. The sleek, clean design of the recyclable "panel-less" plastic bottle, which was introduced in 2004, has already received three packaging and design awards. Honest Tea is planning to introduce two additional white tea varieties in glass in March 2005. Honest Tea is the nation"s best-selling and fastest-growing organic bottled tea company whose mission is to make great-tasting, truly healthy organic beverages - real tea, real taste and lightly sweetened with only 1/3 or less of the sugar and calories of most bottled drinks. For the past two years the company was ranked in Inc. magazine"s annual list of the 500 Fastest Growing Companies in the United States. Honest Tea"s products include large leaf tea bags and ready-to-drink tea in both glass and plastic bottles. All varieties are USDA organic and Orthodox Union kosher.

For more information about the company and its products, visit www.honesttea.com