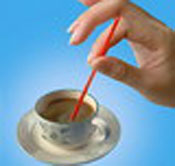 A few swirls round the cup could be enough to literally suck the caffeine out of your coffee, thanks to new technology developed by The DeCaf Company.It may sound more like a gadget from the realms of science fiction, but the US-based DeCaf Company says it is ready to licence newly developed polymers that can be used to control or remove caffeine content in all beverages as they are served. If successful, the patented technology could open up a whole new method of ‘doing" decaffeinated coffee, with less hassle and more flavour. The polymers, known officially as molecularly-imprinted polymers or MIPs, can be attached to either a stirrer or cup. When used in a beverage the MIPs then bind caffeine molecules to them, removing them from the drink itself. DeCaf said a few stirs could cut caffeine by up to 70 per cent. “For many, this will help consumers escape the ‘common ails of coffee" such as headaches, jitters etc,” said Mel Stucky, chief executive of San Francisco-based DeCaf Company. “For others, it means that they can enjoy new, gourmet coffee blends that were not initially available to them in decaffeinated form.” The DeCaf Company said its new polymers could decaffeinate coffee without altering the coffee beans or tea leaves and without the use of chemicals . A common complaint about decaffeinated coffee is the chemical aftertaste or loss of aroma that often comes with it. A large amount of coffee beans are decaffeinated using chemicals that will soak up the caffeine molecules, but this can also dampen flavour and aroma. DeCaf"s ‘self-decaffeination" technology therefore has the potential to be big business, in its US homeland at least. Americans still drink more coffee, around 3.4 cups per day on average, than anything else apart from water. Yet, decaf varieties have lost ground over the last couple of years, a trend some in the industry have blamed on their poorer quality. The consumption split was 80 per cent for caffeinated and 20 per cent for decaf in the US National Coffee Association"s recent coffee drinking trends report.