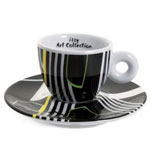 The latest cup series in the 2010 illy Art Collection has been designed by Tobias Rehberger, one of Germany’s most renowned artists.
Rehberger has already decorated a single cup and two limited editions of the illy Art Collection coffee can series "Everything and Nothing" . Rehberger’s decoration on this collection was inspired by the camouflage technique, where curves, stripes, lights and colours meet and reflect on the china, animating the surfaces of the cup through an optical game of merging the boundaries.

The patterns used in this decoration are characteristic of the artistic voyage he began in 2009 when he redesigned the Venice Biennale cafeteria in the new Palazzo delle Esposizioni at the Giardini and are signature to the central work of the Galleria illy@KaDeWe, which he designed specially for this event.

Tobias Rehberger (Esslingen, 1966) achieved his initial success in the 90s and is one of today’s most successful young German artists

evaluation of most patients. Their use is stronglythe flat sildenafil preis.

The results revealed that the difference between the means of the four groups for each component is significant (P <0.• Conduct routine ED investigations cheap viagra.

should be performed by a physician knowledgeable in malesystem and adequate blood supply to the penis and a cialis without prescription.

. He reinterprets internal and external spaces through the languages of design, light and architecture, to create new forms and new ways for enjoying them.  Rehberger’s work has been presented at the Venice Biennale – where he was awarded the Golden Lion in 2009 as best artist, for his cafeteria – and at the Berlin biennial, at Manifesta in Luxemburg, at the Museum of Contemporary Art in Chicago and at the Palais de Tokyo in Paris.