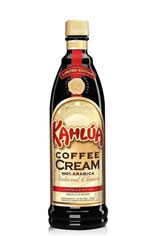 Kahlua introduces its new "Coffee Cream". This coffee liqueur combines Kahlua, which is made from Arabica coffee beans, along with natural cream .

This new liqueur is an extension of Kahlua's line of coffee liqueurs, made with Arabica beans. The coffee beans are shade-grown and handpicked in the Vera Cruz region of Mexico. Locally sourced ingredients, including Mexican vanilla and cane rum, are key components in creating Kahlua's flavor. The cream adds another dimension to the liqueur, enhancing Kahlua's notes of vanilla, caramel and hints of dark chocolate, the company stated.

Kahlua Coffee Cream will be available nationwide October through December for a suggested retail price of $17.99. For this limited period, it will join Kahlua's range of coffee liqueurs, including Kahlua Mocha, Kahlua French Vanilla, Kahlua Hazelnut and Kahlua Especial.

Andy Nash, brand director for Kahlua, said: "Kahlua has long been considered the go-to choice for coffee liqueurs and we couldn't think of a more natural fit for the Kahlua family than a cream-based liqueur. Staying true to our reputation for authenticity, we wanted to provide those who know and love Kahlua with something unique yet indulgent and we think Kahlua Coffee Cream is just that."